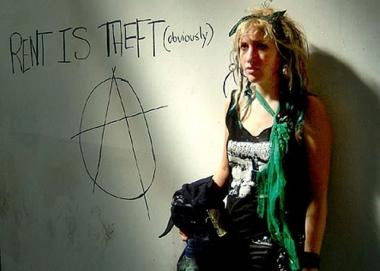 For fans of the highly uunderground series "Streeetz!" this is the long awaited full length documentary movie! "Streeetz! The Uncencored F---Youmentary" is a tongue in cheek anti-capitalist documentary made in Austin, TX about music in a failing economy.

The "Streeetz!" movie and series both feature starving artists, homeless youth, street performers and crossdressers, panhandlers, convicted felons, users, pessimists and idealists! Each is interviewed on issues like socialism, anarchism, transient living, trainhopping, minimalism, alcoholism, recreational drug use or "squatting," living off the grid. Some are even featured performing everyday off the grid activities that most people would never get to see in their normal everyday lives! For various reasons, each felt that they had chosen the best lifestyle available to them.

"Streeetz!" is produced by DJ TRoLL, who has a useless "liberal arts" degree in broadcast journalism (B.A.) which she earned on full paid scholarship at an under par college southwest of New Orleans. She is also a freelance rock music journalist and promoter. She has green dredlocks, listens to the Misfits and claims she does not care what any of you people think.

She said, "I used to interview big label bands sometimes. I prefer the underground. The musicians and fans in Austin were as underground as I had ever seen. I had to get the whole story. These were real runaways of society with bandannas tied on their necks. I would describe the whole movie as, 'What if Little Orphan Annie or Tom and Huck all ran away hit the tracks with their dogs and guitars and then five years later they met Charles Bukowski on the street? I think that's where this story BEGINS...'"
Posted by CRYSIS RECORDS at 10:25 AM 1 comment: 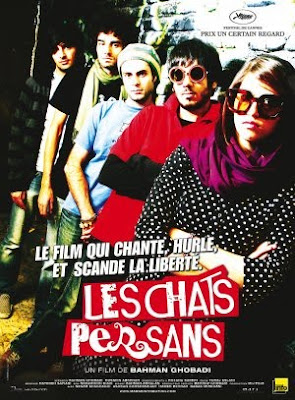 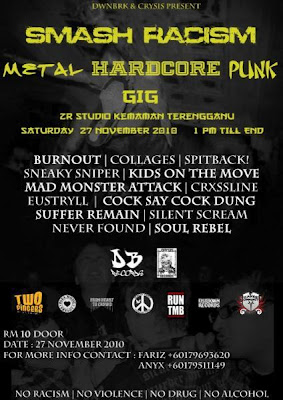 Posted by CRYSIS RECORDS at 5:05 AM No comments: 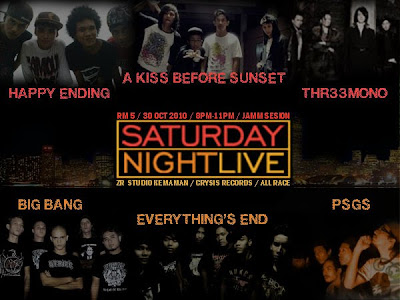 Posted by CRYSIS RECORDS at 5:02 AM No comments: Running time: 42min
Genre: Documentary
Language: English
Description:
THE SOLOMON ISLANDS, PART 2 - Ric and Lincoln O'Barry's mission to the Solomon Islands continues and is fully launched on two fronts. First, they must confirm the true intentions of dolphin dealer-turned apparent reformer, Chris Porter. Secondly, they make inroads with the indigenous people still involved in dolphin hunting. The summit meeting between Ric and Porter is a tense affair complete with accusations and recriminations, but there are no conclusive results. In the end, Porter breaks down during a confrontation with one of the team members. He has dolphins to free, and he wants Ric to help him. On the other front, Ric's delicate negotiations with the dolphin hunting villages are nearly derailed when a letter signed by several chiefs and parliament members is made public. The letter contains a clear warning that Ric, Lincoln and their entire team should stay away from the island of Malaita. Soon, however, Ric and Lincoln are told the letter is a hoax. They proceed to the island and finally enter into an agreement with one of the villages to stop hunting dolphins. It is a rare, tangible victory in the fight to save dolphins.
Huraian: KEPULAUAN SOLOMON, BHG. 2 – Misi Ric dan Lincoln O'Barry ke Kepulauan Solomon diteruskan dan sepenuhnya dilancarkan pada dua peringkat. Pertama, mereka harus mengesahkan maksud sebenarnya dari seorang dealer ikan lumba-lumba, chris porter yang berpaling menjadi reformer dengan jelas. Kedua, mereka membuat terobosan dengan masyarakat adat samaada masih terlibat dalam perburuan ikan lumba-lumba ataupun tidak. Pertemuan puncak antara Ric dan Porter adalah urusan tegang lengkap dengan tuduhan-tuduhan dan saling tuding, tetapi tidak ada hasil yang konklusif. Apa yang berlaku? Sila ikuti sambungannya di sini.
Watch Online:
http://www.megavideo.com/?v=TRH1HXXE
Download:
Blood.Dolphins.S01E03.DSR.XviD-OMiCRON
http://rapidshare.com/files/424583860/Blood.Dolphins.S01E03.DSR.XviD-OMiCRON.part1.rar
http://rapidshare.com/files/424598151/Blood.Dolphins.S01E03.DSR.XviD-OMiCRON.part2.rar
---or---
http://www.mediafire.com/file/8n7t52cb4aqi1l4/Blood.Dolphins.S01E03.DSR.XviD-OMiCRON.part1.rar
http://www.mediafire.com/file/usar5r2bxze99u7/Blood.Dolphins.S01E03.DSR.XviD-OMiCRON.part2.ra
Torrent:
http://thepiratebay.org/torrent/5838639/Blood.Dolphins.S01E03.DSR.XviD-OMiCRON
Posted by CRYSIS RECORDS at 2:14 AM No comments: 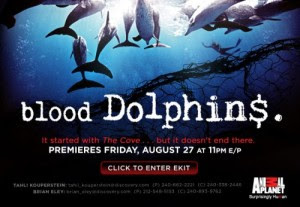